Preserving food is making a comeback. Perhaps it is the nostalgia of watching a parent or grandparent begin the cathartic process in the fall.  Or the benefits of being able to eat local produce year-round and the cost savings. Not to mention, in these crazy times, limiting visits to the grocery store.

In ancient times, when humans had to hunt and gather food, there was no way of storing or preserving it to prevent it from going bad, so methods were designed to harness nature.

Food preservation has permeated every culture at nearly every moment in time, from freezing meat on the ice in cold climates to drying food in the sun in warmer ones, enabling humans to stay in one place for a longer time and form a community. With these tactics, immediate food consumption was no longer necessary as food could be preserved and stored for later use – preserving the local food sources using the same basic methods which are still in use today.

Drying is the oldest and simplest way to preserve food, dating as far back as 12,000 BC.

This method, which is particularly good for meats, fish, fruits, and vegetables, was achieved in ancient times by simply leaving food out in the sun to dry. Dried fruit is a popular and healthy modern-day snack, another example being beef jerky.  Florence Meats in Oakville specializes in a South African style of dried meat called Biltong, which is covered in spices and coriander seeds and eaten as a snack. 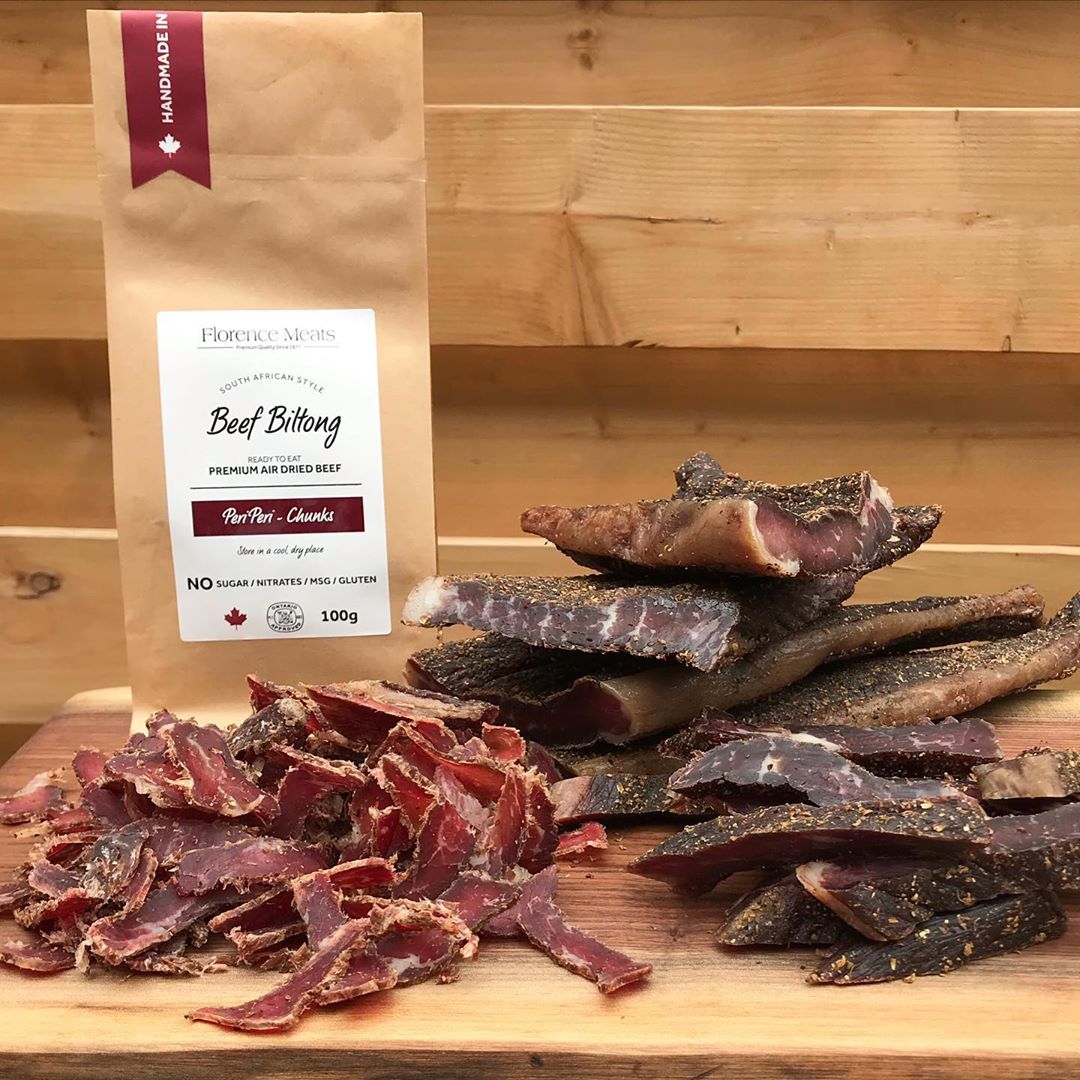 Freezing was an obvious preservation method in the correct climates. Even less-than-freezing temperatures could be used to prolong storage times, often by using cellars and caves to maintain a low temperature.

Some homes had icehouses built to store ice and food on ice. Soon the ‘icehouse’ became an ‘icebox’. In the 1740s, William Cullen, a Scottish scientist, invented the first form of artificial refrigeration.

Kerr Street Cafe in Oakville has gourmet frozen meals that can be whipped out to impress in no time.  Familia Fine Foods in Burlington and Monastery Bakery in Oakville also have good offerings, or try That Pie Place in Burlington. 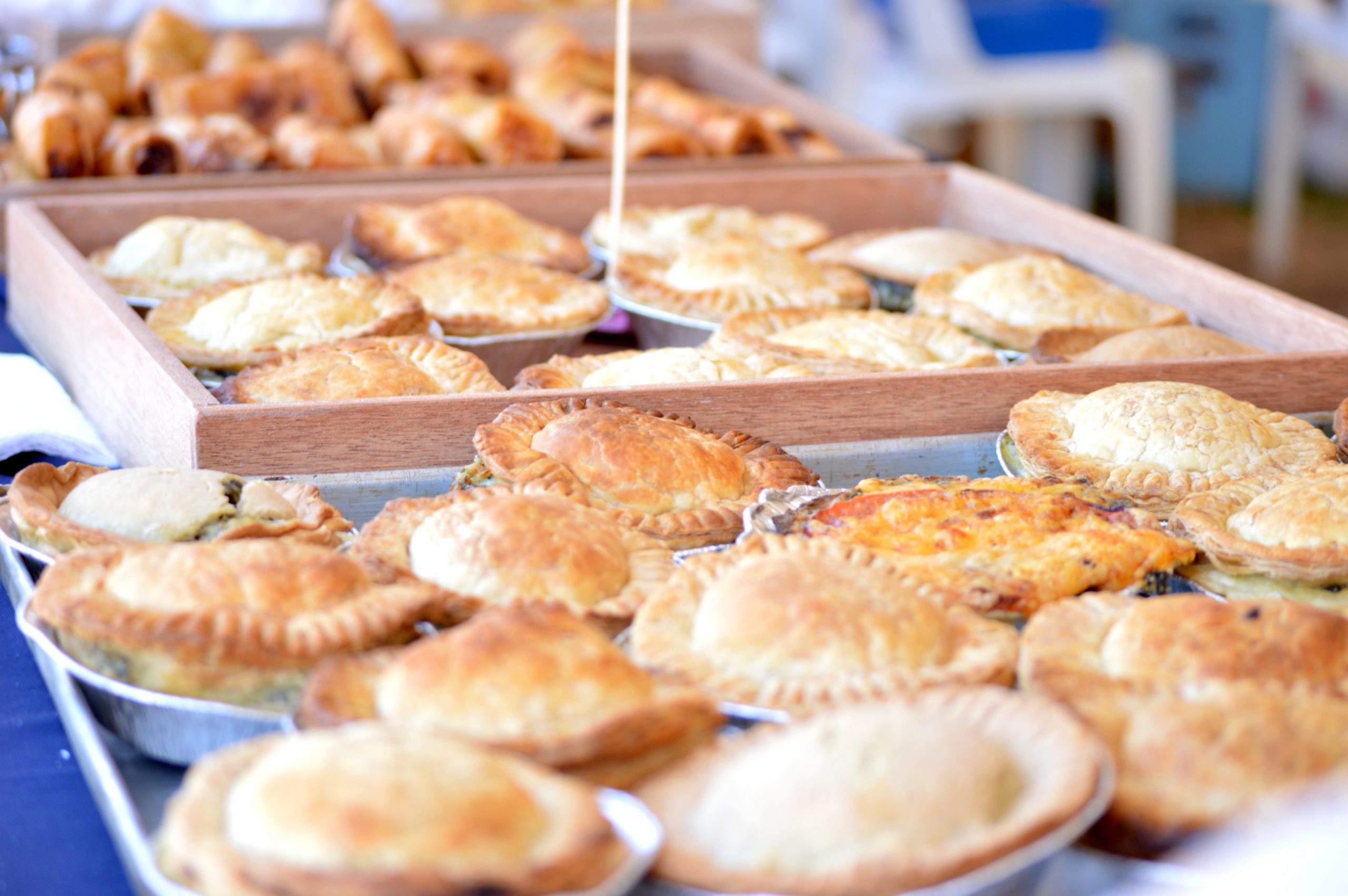 Smoking food is another preservation technique and was probably discovered by early cavemen burning fires in their caves without chimneys, causing the cave to fill with smoke and thus exposing food to smoke and unknowingly preserving it. Over time, pretreating the food with salt before smoking made smoking even more effective. Today, smoking is mainly used to flavour food rather than merely preserve it.

Fermentation, discovered by accident, was a valuable preservation method dating back to 10,000 BC. It not only preserved foods but increased nutritional properties and was used to create more palatable foods from less than desirable ingredients.
Micro-organisms responsible for fermentation can produce vitamins as they ferment, producing a more nutritious result from the ingredients. Sauerkraut and Kimchi are popular for their gut health benefits.  Cheese is another example, where milk is fermented to enhance its storage capabilities.

A wide array of interesting cheese is available at Farmhouse Artisan Cheese on Kerr Street in Oakville. 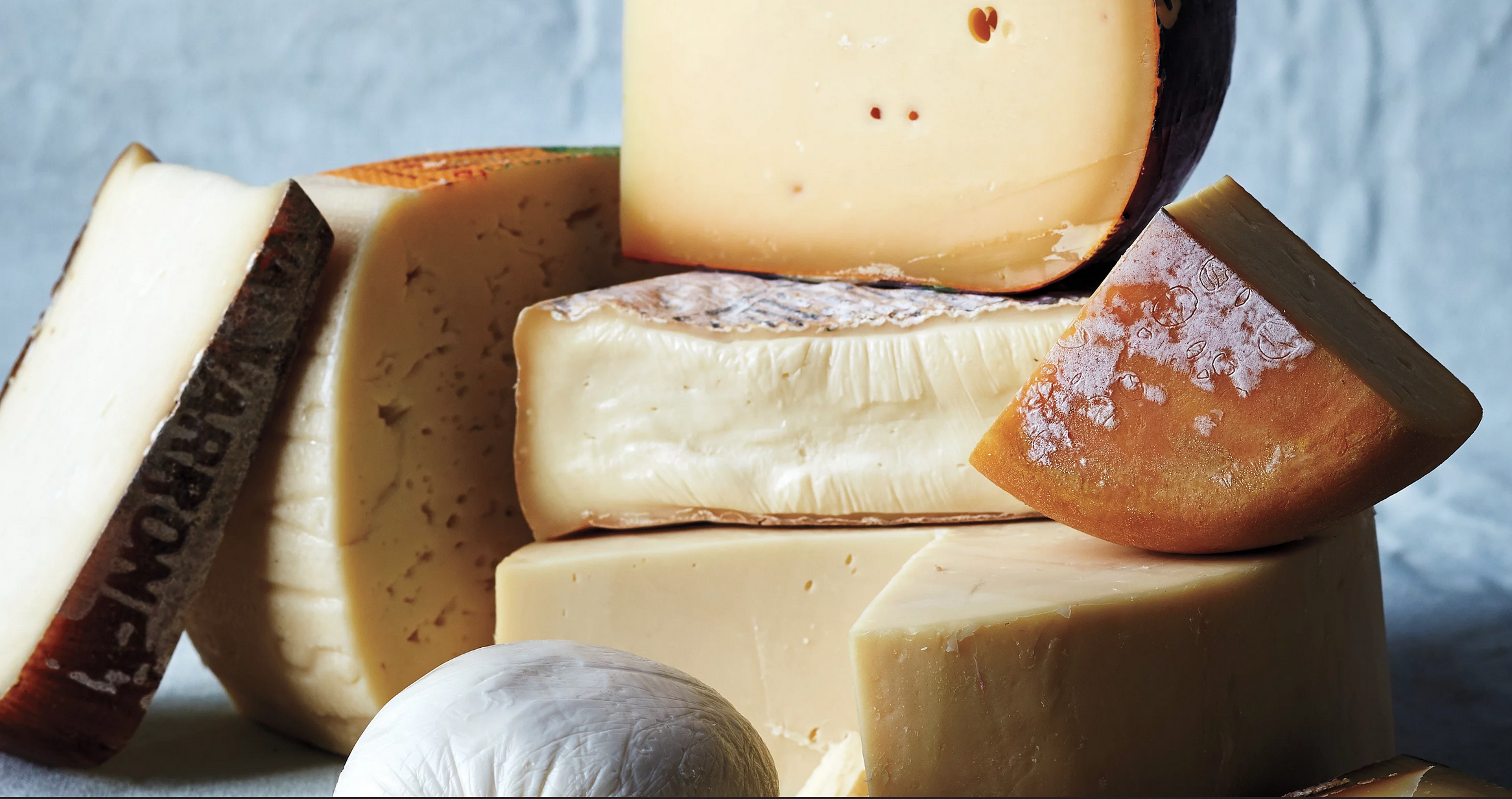 Canning is the process by which foods are placed in jars or cans and heated to a temperature that destroys microorganisms. The heating and cooling of the cans form a vacuum seal.

Canning is the newest of the food preservation methods and was pioneered in the 1790s when a French confectioner, Nicolas Appert, discovered that the application of heat to food in sealed glass bottles preserved the food from deterioration. Nowadays, many people do their own canning at home. Fresh peaches and apricots; tomatoes and marinara sauce; there is no limit to what can be preserved, and there are so many websites that offer recipes for beginners!

Pickling may have originated when food was placed in wine or beer to preserve it since both have a low pH. Perhaps the wine or beer went sour and the taste of the food in it was appealing. Spices were added to these pickling sauces to make interesting recipes.

Chutneys, relishes, piccalillis, mustards, and ketchup soon became common accompaniments. Worcester sauce was an accident from a forgotten barrel of special relish. It aged for many years in the basement of the Lea and Perrins Chemist shop and was first sold in 1837. 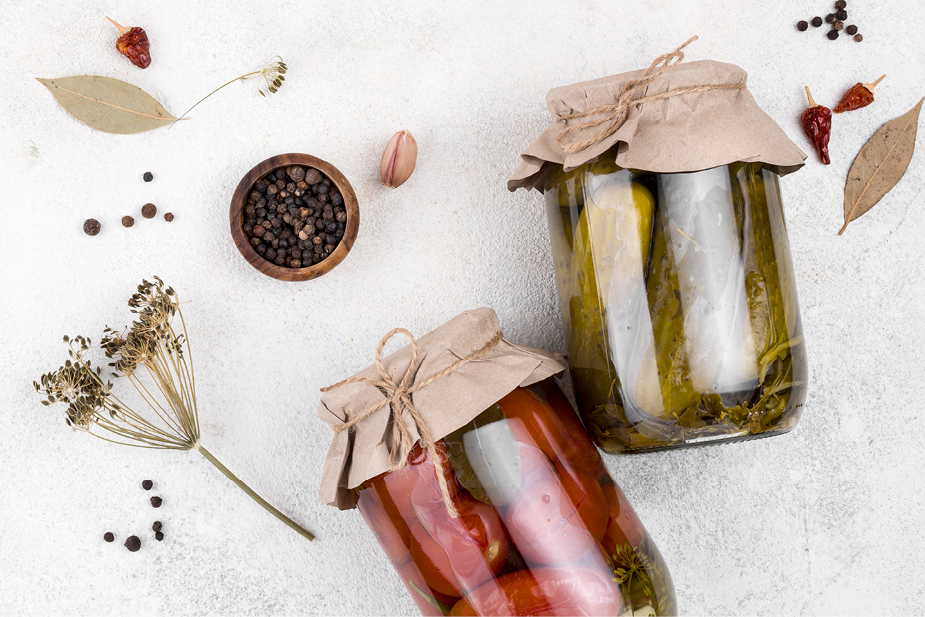 Jams, jellies, and preserves use honey or sugar to preserve fruits. In ancient Greece, quince was mixed with honey, dried, and packed tightly into jars. Springridge Farm, near Milton, has been turning their harvest into preserves for over 35 years.  Their recipes are steeped in tradition being passed down from Grandma Hughes.  Their signature items are strawberry jam, chili sauce, and red pepper jelly. They also do specialty limited edition products like the Royal Wedding Jam in 2011 and the Canada 150 Jam in 2017.  Their seasonal Christmas Marmalade is also very popular.

TK Preserves (@tkpreserves) make a special preserve of wildflower honey and spiced nuts that is the perfect accompaniment to cheese or try their Niagara peach ginger preserve on a slice of buttered toast.

Cranberry sauce or jelly is a popular preserved item as we approach Thanksgiving. Traditional cranberry sauce – stewing cranberries in water and sugar – dates back to the 1630s.

In the 1800s cranberries were farmed and were dry harvested or picked by hand. It was time-consuming and hard work but this process is still used to pick the fresh cranberries you see in stores.

In the early 1900s, farmers realized that flooding the bogs where cranberries grew loosens the berries from the vines until they fall off and float to the surface. Known as wet harvesting, this is far quicker and easier – these cranberries are used in juices and preserves.

With summer drawing to an end it is time stock up your pantry this fall with your favourite goodies.

The fruits of your labour will also make great gifts, sure to impress your friends and family! 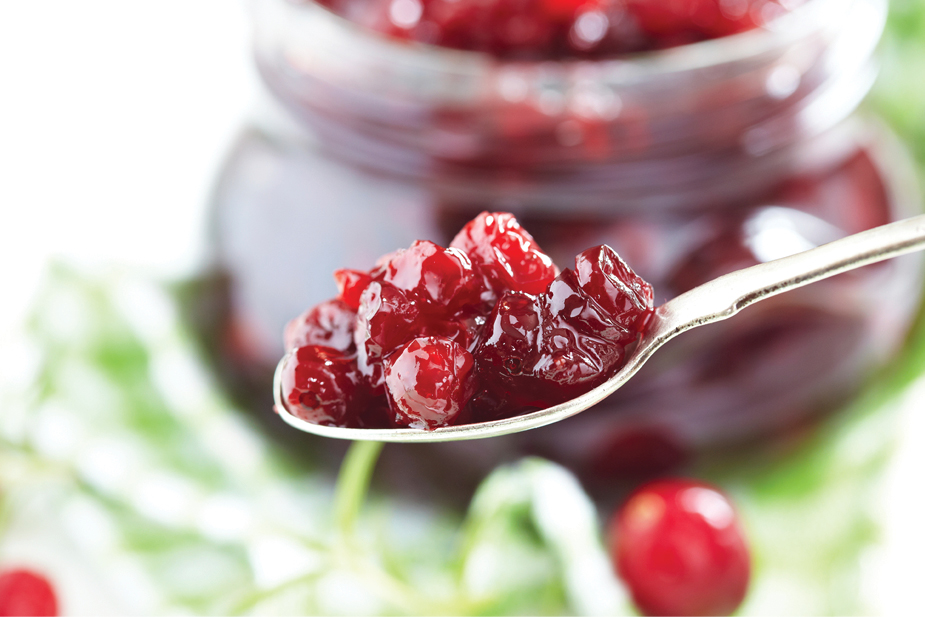