Every year on November 11th, we all take a moment to remember. To remember not only the sacrifice of the 120,000 Canadians killed in war, but also to celebrate the rights and freedoms they protected with their lives. Today, a collective memory of the World Wars exists; one created in our classrooms, one heightened by photographs and accounts of journalists who were there, and perhaps from first-hand accounts of our parents or grandparents who were there. Local memorials, cemeteries, and historical documents also help to connect us in an immediate meaningful way with the large histories of those conflicts.

As Remembrance Day approaches, we don poppies and prepare to honour and remember the fallen and those who have served. The history of the local war memorials and the traditions that are observed there is an interesting study in itself. The ceremonies generally take place at 11 am on November 11th which mirrors the timing of the armistice which marked the end of the First World War. The memorials that were erected following the First World War are often referred to as cenotaphs, meaning simply ‘empty tomb,’ and stand as a symbolic monument to the huge numbers of those who didn’t return. Many of these memorials received additions after World War II and the Korean War to recognize the fallen from those conflicts. These memorials have come to be the focus of local Remembrance Day ceremonies, where parades, the laying of wreaths, trumpet calls, and readings of Lieutenant-Colonel John McCrae’s “In Flanders Fields” echo the national service in Ottawa at the Tomb of the Unknown Soldier near Parliament Hill. Both the local and national services are organized by the Royal Canadian Legion.

Burlington’s first cenotaph originally stood by the lake in what is now Spencer Smith Park. It was dedicated by then Governor-General Lord Byng in 1922. Field Marshal Julian Hedworth George Byng had been in command of the Canadian Army Corps on the western front in WWI. Featuring a larger-than-life bronze statue of a WWI soldier, the memorial was moved next to the new City Hall in 1962 where it continues to be the centre of Burlington’s ceremony. The City of Burlington and the Legion also hold a sunrise ceremony at the Royal Canadian Naval Ships Monument in Spencer Smith Park. The monument lists all the Canadian warships and the 370 ships of the Canadian Merchant Navy in WWII and includes the ship’s bell from HMCS Burlington.

In Oakville, Remembrance Day ceremonies take place in three locations. Closest to Downtown Oakville at 179 Trafalgar Road, is The George’s Square Veterans’ Memorial – which grew from the original WWI cenotaph to include the fallen from WWII and the Korean War. Originally, it listed only names of the dead from those wars but in 2010 it was expanded to include those who served. These names are found on bronze plaques fixed to curved walls that flank the original monument to the north and south. The more recent addition features the names of 29 Oakville veterans who have served in armed conflicts since WWII and includes Colonel Geoff Parker who was killed in Afghanistan in a suicide car bombing in 2010. Colonel Parker was commanding officer of the 2nd Battalion, Royal Canadian Regiment, and the highest-ranking Canadian to die in the Afghan War. Separately in the park is a monument to Halton’s Regiment, The Lorne Scots, which can trace its battle honours back to the war of 1812. 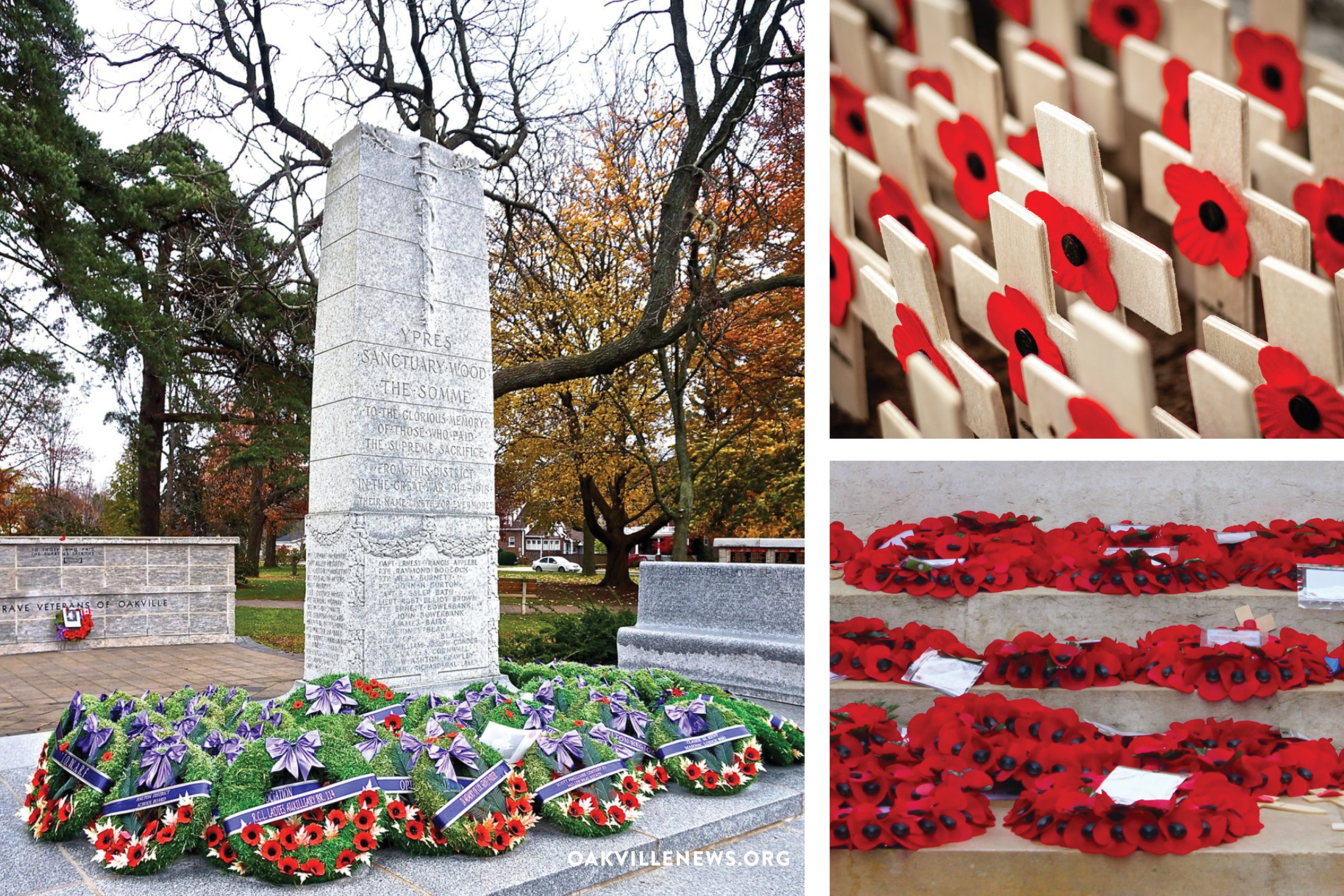 There is also a ceremony at Memorial Park in northeast Oakville. This memorial was constructed mainly from material taken from Trafalgar Township’s Memorial Hall. Here again, are a series of bronze plaques listing the men and women from Trafalgar, including a replica of the original plaque from the hall.

Finally, there is a ceremony in Bronte Village at the Oakville Cenotaph just off Lakeshore Road, adjacent to the harbour. This monument is a granite-faced column with the engraving:

A TRIBUTE TO THE DEAD

It is a stark and effective example of the traditional message behind Remembrance Day.

McCrae’s poem and the tradition of the poppy are well-known. Other features of the ceremony are grounded in military tradition, but might not be as well understood. There are often bagpipes playing as part of the parade and a ‘Pipers Lament,’ which reflects the tradition of Canada’s many Highland Regiments, the Lorne Scots among them. In WWI, proud of their Scottish roots, the Highland Regiments typically wore kilts with their uniforms and their pipers would often play the men into battle, in defiance of regulations against this highly dangerous practice.

Today at ceremonies you will hear a trumpet play a series of calls which are the signals that traditionally regulated a soldier’s day. ‘The Last Post’ was used to signal that the setting of the watch was complete for the night and symbolizes the end of duty for the fallen. This call is followed by two minutes of silence. The ‘Rouse’ was given to wake the troops and it symbolizes the dawning of a new day and the dead “rising above their mortal duties.” After the calls, a piper’s lament, as mentioned above, is often played, typically a slow tune appropriate for mourning the missing and the dead.

The focus of Remembrance Day has evolved over the years from remembering the fallen to including all those who have served in the armed forces in conflicts and peacekeeping missions to the present day. Due to COVID restrictions in recent years, the on-site attendance at ceremonies has been limited to participants only and the proceedings have been streamed online for virtual participation. As this year’s COVID situation is still fluid, it’s best to check with your local Legion or visit oakville.ca or burlington.ca for final arrangements. There's nothing old-fashioned about this Old Fashi

Raindrops on roses and whiskers on kittens Bright

Who's getting their 🎄 this weekend? 🙋 Check

A busy weekend of wintery events lay ahead! 🎄

Christmas has come early with this outrageously de

Shop downtown Oakville this holiday season and you

Candlelit Stroll is back! On Friday November 25th

This is such a great gift idea! If you want to rea