Guilds were originally formed in the Middle Ages in order to oversee the practice of their craft in a certain locale. The earliest guilds were like a brotherhood of tradesmen. Today they function more as social and creative outlets.

You might think you’d have to be an expert in a guild’s craft in order to join. Has anyone become a member without any experience whatsoever? “Yes, me,” kids Murray MacDougall, president of the Burlington Sculptors and Woodcarvers Guild. Just prior to retirement, MacDougall says he was worried he would have nothing to do. He was invited to come and give it a try. That was four years ago. He says the best aspect has been “Keeping the brain going. That was my goal.”

Richard Darjes, president of the Oakville Sculptors & Woodcarvers Guild, is also a retiree and a hobbyist woodcarver who’s also interested in stone carving. One of the benefits about being a member, he says, is that everyone’s more than happy to share their talent. “I’ve watched people doing stone carving and they’ve shared their tips. It’s actually a great group of people to be a part of.” He also enjoys the deliberate 3pm coffee break when anyone present can sit in the senior’s centre and enjoy a chat.  “We have a great time sharing with one another. That’s made it a very social organization. Carving (or maybe any art) can be a little solitary when you’re not part of a group.” 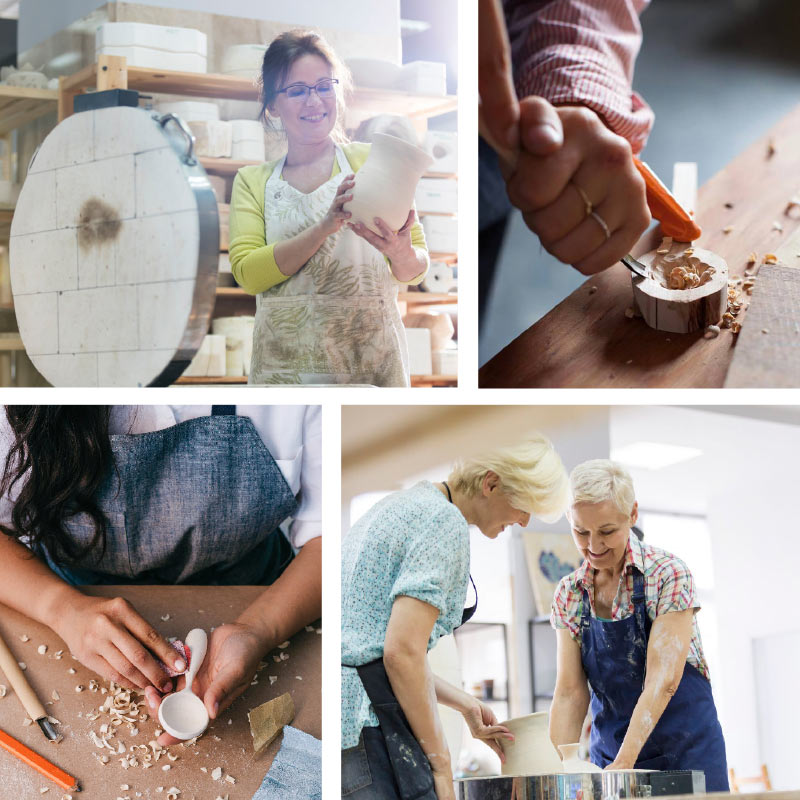 The Guild was formed in 2002, and currently has 24 members who meet every Thursday at Queen Elizabeth Park Community & Cultural Centre. Members meet in the woodshop to enjoy socializing with like-minded individuals, and they exchange ideas and techniques. The Oakville guilds have a full compliment of power tools for use, though most people own their own tools. The Guild participates in wood shows and exhibitions, including Oakville’s annual Art in the Park.

The Guild operates out of the Art Gallery of Burlington. Woodcarvers meet weekly on Tuesdays and Thursdays; sculptors meet every Friday. Members whittle away their time crafting many different kinds of work: folk art, stone, spoons, birds and wildlife, intarsia, bowls, stylistic interpretations and many others. Ages of the members cover a wide range: there are a few teenagers mixed in with the older members – from about age 15 to 80, according to MacDougall. There are also some ladies involved, and some people who both carve and sculpt. The Burlington Guild runs juried exhibitions, participates in various gallery sales and area woodcarving competitions, and they also perform carving demonstrations for local schools and charitable organizations.

The objectives of both guilds are essentially the same: to bring people together who share a common interest, to provide opportunities for them to share ideas and their love of art, and to promote appreciation for carving and sculpting in the community. For example, the Burlington Guild makes canes for local veterans. “We carve the handle in the shape of a beaver. Everyone does it differently so they’re all unique. On the staff the person’s name and rank is carved,” says MacDougall.

On any given meeting day you’ll find people working on different projects and with different tools. “Carving is a great deal of fun actually,” says Darjes. “Learning to think in three dimensions has taken a little time. Being able to think about the object I’m going to make and how to represent that in wood is part of the learning curve that makes it interesting.”